If you didn’t know, I love Paris. I mean, I may be a little obsessed. Or just call me a Francophile. (Is that a creepy word??) 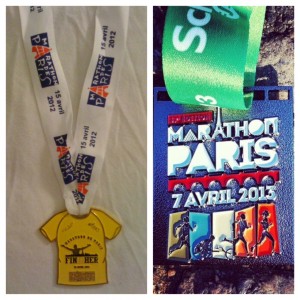 Today was the 2013 Paris Marathon. I always wish I was in Paris sipping coffees and eating macarons, but after looking at the race pictures on Facebook, I really wish I was there today among all those participants in such a beautiful city. The weather looked perfect and the finisher medal looks a lot prettier than mine from last year. (I’m a little jealous.)

I guess, for now, I’ll have to live vicariously through Facebook. But thank you Facebook for reminding me that I need to go back and run this again someday!

That’s Heather, on the right, with her finisher medal

On a side note, yesterday was the AR50. It’s the American River 50 Mile Endurance Run, that starts at the Guy West Bridge in Sacramento and ends in Auburn. An amazing gal, Heather Monahan, ran it and finished it! I have only met Heather once by chance in the porta pottie lines (it was like finding a needle in a haystack) at the LA Marathon a few weeks ago, but we’ve kept in touch on Facebook for a while now after finding each other through a mutual friend, Manny. I guess you could say we’re virtual running buddies.

I followed her training for weeks before the race and peeked at her progress all day yesterday. She had so many supporters and friends rooting for her then entire way. She ran this in memory of her father that passed away last year. She also raised money for charity. The training and fundraising are both huge tasks. But she did it!

50 miles is quite a distance and she accomplished an incredible feat. Pretty inspiring if you ask me. Congratulations Heather, you inspire me!

Here’s her blog if you’d like to check it out: www.runfordad.tumblr.com