With the year coming to a close, we all tend to look back on the year; what we’ve been through and what we’ve accomplished. My year started off a little shaky and stressful but quickly turned into one amazing and epic year full of great adventures and a lot was crossed off my bucket list.

Clint and I bought a house together (crazy!), I ran a marathon in Tokyo, Japan(!), ran the Boston Marathon a second time (such a great time!), then ran the Boston to Big Sur Challenge six days later (I’m one of those crazies)…then started training for an ultra…then ran the Athens and Istanbul Marathons within a week of each other, and finished off with running the California International Marathon for the 8th year in a row. That was six marathons this year! Ummmm, crazy!

I met new running friends this year, became a USATF official, worked as an expo coordinator for the CIM (that local, hometown marathon of ours), and also helped coach the Runnin’ For Rhett organization’s half marathon training program in the fall. Yeah…a lot of running stuff. But as I get older, I realize more and more that passion is the key to happiness. Do the things you really love!

Aside from running, I got to hot air balloon twice(!) and see the Grand Canyon finally. BIG checks off the good ‘ol bucket list.

I wish for you all to do the things you love so you can find your happiness. I hope your 2016 is as great as my 2015 was. I really don’t know how I will ever be able to top it, but I do know there’s still lots out there for me to learn, discover and see in the world. I have plenty of other countries on my list of where I hope to run all over the world. I’m hoping to get more in next year. Peace! 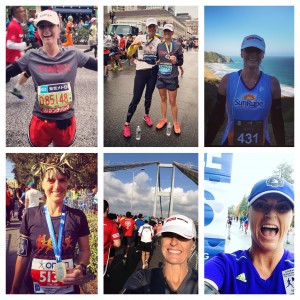 After I ran the Boston to Big Sur Challenge back in April I really didn’t think I’d run back-to-back marathons again. It definitely wasn’t easy and wasn’t something that I was keen on doing again. However, when the opportunity came to go to Greece for a “racecation” I was doing research and discovered that the Istanbul Marathon was the following weekend. This race was already on my bucket list so I HAD to do it if we were going to be traveling that far and had already talked about going to Turkey. So, here I was again, faced with back-to-back marathons, but I wasn’t stressed about it at all. I knew I wasn’t going to be running them for time or super fast, so I was pretty confident I’d be ok.

After having a super late carb up meal around 12:30am after Clint arrived in Athens and only two hours of sleep, I left a sleeping Clint to walk to the metro to get to the buses leaving for the city of Marathonas. The buses loaded up at the Parliament building in Syntagma Square and it was dark. I chatted with a Parisian and another American from the Bay Area on the bus, which made time pass quickly. The sun was rising and it was beautiful when we arrived. I dropped off my gear bag and headed for a porta pottie. In the meantime, runners were warming up on the track at the field we were at. I watched them go round and round. It was like watching a treadmill with lots of people. It just kept going and going. Not long after, we got in our corrals and we were asked to raise our right hands and a special pledge was read out load, although I couldn’t understand what they were saying. As it turned to 9am, the balloons were released and the corrals were off! 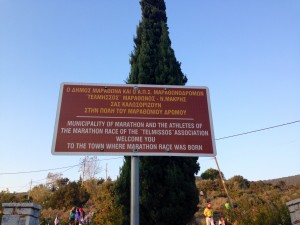 It was very exciting starting the race and running through Marathonas. I saw these very cool historical kilometer signs along the route designating the marathon course. Not long after we started I noticed spectators in the town passing out small branches of olive leaves to the runners as we passed by. An old woman handed one to me and I quickly figured out how I was going to hold it the entire race, hoping it would give me energy to finish. Many runners tucked them into their hydration belts or hats. I managed to slide mine behind my cell phone armband.

The weather was a lot warmer than I thought it was going to be. I had heard the hills were going to be tough but I hadn’t expected warm conditions. And coming off of being hungover the day before, I had a feeling the warm weather would affect me. I wasn’t concerned with my overall time so I tried to keep a slower pace, but I still struggled during part of it. It was pretty warm and humid, and my body doesn’t do well in these kind of elements. 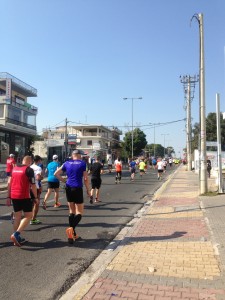 This was a gradual hill…

I was told there would be hills, but didn’t think much of it. I’ve done Heartbreak Hill a few times, but these hills were tough. Long, gradual hills (they call them “gentle long hills”) for most of the middle of the race. The last 6 miles were downhill so I just had to get through the damn hills. I saw a lot of people walking and pulling off with cramps and even witnessed a girl projectile vomit. I felt bad for her and asked if she needed help. She said no as she threw up again…and again. I offered to get a medic which was nearby but she refused help.

The water stations were great and there were plenty, but I dislike when races give full water bottles. It’s such a waste. They also had lots of electrolytes and fruit along the way. Toward the end they even had cups of Coca Cola. I was so happy to have a cup of that sugary goodness. The bubbles were great as well.

There were periods of the course that had lots and lots of spectators yelling “Bravo! Bravo!” but there were definitely stretches with no spectators at all. I did my best to high five as many kids as I could as I ran by. There were quite a few security or police posted along the way as well. As we reached the end and started our way into the center of the city of Athens, the crowds got larger and larger. I looked around hoping to see an American flag or maybe even see Clint, even though I told him to be at the end. We had to designate a meetup spot since we couldn’t communicate by phone. As the crowds got larger and louder, I got more excited to run into the 1896 Panathenaikos Stadium. 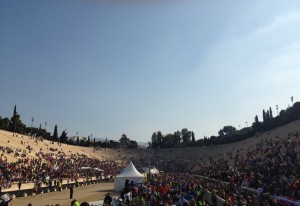 The last mile was exciting! As I entered the stadium, I pulled out my phone and took video of the last moments. It was unreal. The stadium was so big and there were so many people in the stands. It was loud and amazing. I really don’t know how to describe it. I just looked around at everything trying to take it in.

The unfortunate thing was the volunteers or security, don’t really remember which, wouldn’t let us stop and take pics after we finished. They were just trying to get us through the lines and move us along. I snuck a few pics anyway and then made my way through the long lines to the gear check area, where I told Clint to meet me. Poor guy had waited an hour for me. But I was really glad to see him and he had made me an olive branch crown, which was so sweet. After I got my bearings and relaxed, I made him walk back into the stadium to see it. I wanted him to see how grand and amazing it was. This was history here and he needed to go in there. 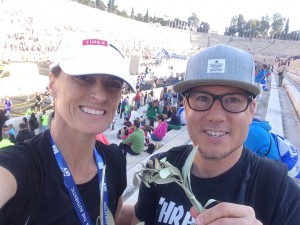 We spent a little bit of time in the stands and watched some runners finish. It was so cool, but I knew I wanted to see the stadium empty of all these people at some point in our trip. After getting a few selfies, we walked to the Plaka area and had lunch and relaxed. It was so cool to see all the runners walking around in the area with their medals around their necks. Locals would ask if I ran the full marathon and were impressed. An employee at a boutique we stopped in asked me how I liked the race and I said it was amazing, especially running into the stadium, and then I started to choke up. She knew how special this race was.

This year’s race broke the record of having more than 43,000 total participants and came from 100 countries. 16,000 came to run the classic course (marathon only). Not only is this course the original course, but also the same course used in the 2004 Olympics.

Some of the cool things included in the registration fee: a 5-day transportation pass that could be used for any public transportation during my stay (which was so helpful!),  a cool messenger bag only for the out of town participants, a great Adidas participant shirt, a bad ass finisher medal, and the glory of following the footsteps of Pheidippides on this historic course. It’s a bucket list item for sure if you love running marathons. It wasn’t easy, but when is running a marathon ever easy?? 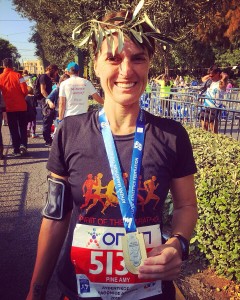 When we bought our house earlier this year, I was having major anxiety about having no money after paying a down payment and all the other things that come with being a new homeowner. All our money is going to … Continue reading →