Like I mentioned before, I love to travel. I have been to several countries outside the U.S. but have also been to many cities and states within the U.S. as well.

I have been traveling for many years and found out very early on that I will do anything to go on a new adventure. Even when I have been unemployed in past years, traveling was a priority.

There are so many other countries I would like to visit, so this is why I started taking my running life on the road, or I guess, on a plane. 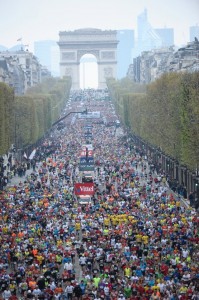 The Champs Elysees and 40,000 people at the start of the race

My biggest running adventure outside the U.S. so far was going to Paris to run the 2012 Paris Marathon. This was very exciting as I had been to Paris before but wanted to go back really bad. So this was a great excuse! I traveled with my running pal Brian and another friend and found a really great apartment rental on www.airbandb.com (I highly recommend this site for lodging). We got there a few days before the race to get adjusted to the time zone and let our bodies rest. However, we had a pretty fun night the first night we arrived. How could we not?? We were in Paris!

This was quite a large race, the largest race I had run, with about 40,000 participants! Very large corrals and just chaos at the beginning of the race. I also couldn’t find bagels at the store the night before, so I had to settle with brioche. I hoped this would tide me over, but started to get hungry in the second half of the race (which is not normal for me).

We started at the Champs Elysees and through the cobblestone streets of Paris, past the Louve, to the halfway point in the Bastille, Notre Dame, past the Seine River, the Eiffel Tower, and finished at the Arc de Triomphe. I was in awe the entire time. Click on this link for the course map -  Paris 2012 map.

There were a few things about this race that didn’t work for me. Porta potties – We, Americans, are used to many of them being supplied before and during the race. I am not sure what the French were thinking, but I couldn’t find any before the race so I had to run 4 miles before I found ONE and it had a hole in the bottom of it! On top of that, a French woman was yelling at me in French to hurry up which was only making this “hole in the bottom” experience even worse for me. Oy vey! (I know. This is not French, it’s Yiddish.) Electrolytes – Powerade was the sponsor and all we saw were people walking around before the race with backpacks with devices to pour it either into your mouth or in your water bottle?? I wasn’t sure what that was all about. Other than that, no electrolytes could have been found along the ENTIRE race until mile 23!! Are you kidding me?! And the tables with water and food along the route were major hazards. They supplied orange slices, raisins and bananas at these tables, but people just threw the peels on the ground and mixed with water was just a bad, bad idea. I practically slipped on the peels running through those areas. 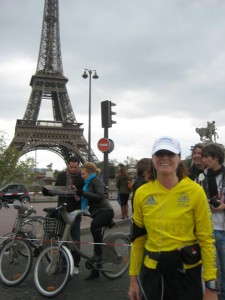 The weather was pretty nice and cool. The people were stinky and mostly European. From what I saw, most of these racers aren’t as concerned with sporting apparel brands and all the stuff Americans wear to race in. They all seemed to be wearing stuff you’d throw on quickly to go to the gym…kind of ratty looking.

This race was pretty amazing with all 40,000 of us. It was also very scenic and beautiful to me. Paris is very special to me so I will never forget this experience. I will be back. Paris, je t’aime.

Berlin is one of the World Marathon Majors and my friend, Brian, and I, got up on October 25, 2012 at 3am to get our entries in. I set my alarm for 2:50am, refreshed the computer screen several times until the entries opened, filled out the form, and hoped for a confirmation back. And we are in!! Back to sleep…

Here’s my post of the Berlin Marathon recap – http://runningtoseetheworld.com/?p=1002

You can read about my most recent international race here – http://runningtoseetheworld.com/?p=1358

You can read about this race at: http://runningtoseetheworld.com/?p=1946

You can read about this race at: http://runningtoseetheworld.com/?p=2012