I love to travel. I love to run. I look young, but I’m old. The best things about my life are my two dogs, Larry and Phoebe. I live for them and they keep me inspired.

Traveling keeps me sane. I have traveled to several different places: Costa Rica, Belize, Bahamas, Honduras, Trinidad, Cuba, Mexico, Canada, France, Germany, Austria, Japan, Greece, Turkey, Iceland, China, and many cities and states in the U.S. I just love the escape and exploring new places. I love the adventures and I thirst for more…

Running keeps me sane. I started running as young as sixth grade and continued to run track and cross-country through middle school and high school. After high school, I kept up running and a little cycling and participated in 5k’s as well as two AIDS Rides from San Francisco to L.A. (1997, 1999), mini-triathlons, Hi-Tech Adventure Race, and the Eppie’s Great Race. While in college, I just didn’t have time to keep up with the small races, but after graduation I realized I was bored and joined a friend’s running group. This led me to run my first half marathon. Soon after, I befriended my running partner Brian and he asked me to help pace him at the 2008 Rock n’ Roll San Diego Marathon. I was a “bandit” and was only supposed to run one leg of the race with him but ended up running 18-19 miles and helped him get to the finish line. I wasn’t training for a marathon, but he suggested maybe I should consider running a marathon and that’s the beginning of my marathon “career”.

After running the same local races each year, I decided I needed to combine my love of 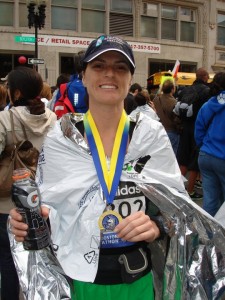 travel with my races. The Boston Marathon was my first running experience out of state and that inspired my quest of running all the World Marathon Majors. This list included five races for several years, but late in 2012 one more was added to make it six. The races are Boston, New York, Chicago, London, Berlin and Tokyo.

So, I am training all year, for the most part. And I am constantly thinking about the next country I want to run a race. It’s really exciting to see other parts of the world and run a race there. I’m Running To See The World!

2 thoughts on “About Me”