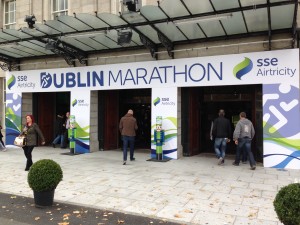 “It’s ok to not feel ok” – I saw this on the back of a gals shirt during the race and I wanted to tell her YES! It kind of became my mantra during the race. And I guess it’s a mantra for life. 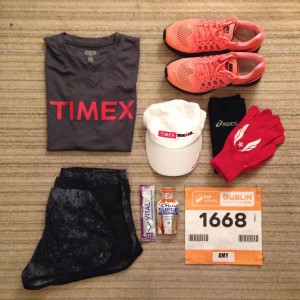 I was prepared for cold, rainy weather. I packed arm warmers, gloves and expected a chilly start. Well, it was far from that. As I got ready in the morning, I checked the weather and it was already 60 degrees and cloudy so I knew this was going to be a warm one. The race also started at 9am so it’s a little later than I’m used to. I walked to the start area from the hotel and wasn’t cold at all. I actually wished I had worn a tank.

I ate my banana, Pure Protein bar (it was easy to pack in my luggage for race day food), and Chia Surge Energy Gel on the way to the start area. I immediately got in a crazy long line for the porta potties when I arrived. I also barely got out of the restroom before the gun went off. There were 14,600 people so it was a bit crazy.

As we started, my watch hadn’t picked up the GPS signal yet so I ran anyway hoping it would pick it up quickly thereafter. After about 1/3rd of a mile, it finally came on but I decided at that point I wasn’t going to worry about my time. I just wanted to enjoy it as best I could and just run. I also never turned on my music, which I believe is a first for me! I thought it would be better to just listen to the sounds around me.

The crowds were pretty amazing. There’s a reason they call it “the friendliest marathon in the world”. So loud and boisterous and cheering every single person on. The whole way I’d hear “well done lads!” or “brilliant!” as we ran by. They were passing out jellies (these would be Haribo gummies) and candies and making so much noise with clappers. Even runners were motivating other runners when they were walking. 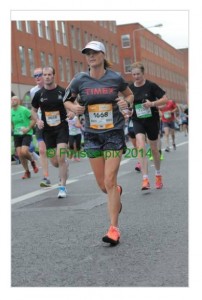 My pace was much slower than normal but I tried not to focus on it and remind myself I was doing this race to experience running in Ireland. Time isn’t everything. Sometimes just the experience of it all is worth more than just a silly PR or “great time”. I found the course difficult which seemed odd since it was posted as being a flat course. There were some hills and there was wind as well. But the heat was making it really difficult for a lot of people. I saw a lot of folks pulling over to the side with cramps, tight muscles, and looking dehydrated. Several ambulances had to come through the course to get to runners. I even had to call for a medic for a runner that pulled off and was yelling in agony holding his hamstring.

I walked during parts and just said “it’s ok!” I noticed a lot of runners wearing orange bibs, like myself, were slower, walking and pulling over to the sides. An orange bib was the first corral of runners with an estimated 3:40-3:50 finish time. So generally these runners have a fairly fast pace. But not today. Many were behind, like I was.

As I passed the 3 or 4 announcing stations along the course, they called out my name and said I came all the way from the USA or the States or United States. That was kind of fun because there were not that many of us from the US running this race. Spectators would call out my name because it was on my bib, but others called out “Timex” because that was on the front of my shirt. I thought it was funny. I wasn’t sure if they thought that was my name (or last name) or knew it was a company.

I sprinted the last 1.5 miles. I was so ready to be finished and happy I was almost done. I rounded the last corner and I could hear on the speakers U2′s “Where The Streets Have No Name” which was too perfect of an ending. I kind of teared up.

My official time was 4:27. Not my best, not my worst. But I just let it be what it was. There’s always another race but there may never be another marathon in Dublin like this for me.

After a long walk from the finish line, I was having trouble finding Clint in the meeting area and my legs were tired so I kept sitting down. After about 20 minutes I got up, feeling really lonely, and looked to my left and I finally spotted him.

The one thing that’s always tough about running international races is I’m almost always running them by myself. There’s no one to start with or talk to during the race, nothing familiar. So I have to just soak in everything else around me and enjoy it as best as possible. I love hearing other accents and hearing people talking to each other. I just watch and observe things around me.

I found out after the race from other runners that the course was changed this year due to construction and this route change made it tougher for a lot of runners. Many runners ran slower times because of this, the warm weather, and the wind. We even heard on the local radio that the elites had a tough time too. 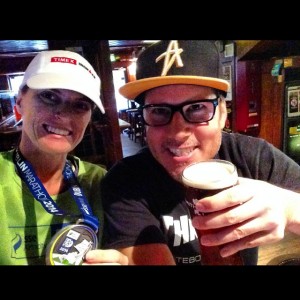 We walked around for a bit after the race looking for a pub to enjoy a beer and food. It was a bit of chaos in the immediate area around the finish, so we walked a little further and came upon a pub down an alley in the Temple Bar area. We had beers, fish and chips and lasagna. Delicious!

I am finding that the journeys I go on to run marathons in different countries are somewhat of a parallel to life. We find joy and passion in things and sometimes it takes the struggles and suffering to get to the good parts of life. I find that running marathons is exactly this. Sometimes they just suck royally to get to the finish line and sometimes they are just amazing and beautiful. Either way, it’s all part of life and what we do to be stronger and appreciate things more. I still feel really lucky that I have the means and get to run all over the world.

I read this the other day: “In a lot of ways, people think I’m kind of crazy. There’s a little bit of crazy in us all, though. If you’re going to line up for a marathon and call that your sport, you’re definitely a little messed up, but I get a weird satisfaction out of it.” – Lauren Klepplin (American long-distance runner)