Over the last 6 months I have incorporated a few different elements into my training. Some of it was intentional and some just happened.

After I ran the LA Marathon in March, I took 3 full weeks off of running. Then in April, I started a circuit of lunge and squat cross training (provided to me by my gym owners who are also personal trainers) that I would add into the mix of my weight training once a week. This was intentional. I wanted to see if this would make a difference in my normal marathon training. Some weeks I would add a few of the exercises into another day as well, but I did this circuit at least once a week. Some weeks I was more sore than others, but every week I sweated my ass off when I did this series of exercises. I also know it has helped build my endurance and has helped with my speed. My last 20 mile training run I ran at an 8:20 average pace, so I was pretty happy with that. My legs feel stronger too.

Recently, I also started adding more organic and raw foods into my diet. This was partially due to Clint wanting to change his diet during his chemotherapy treatments over the next four months. He started juicing in August with his Breville juicer and then got his Norwalk cold press juicer a couple weeks ago and that makes even better, more nutritional juices and drinks. There is a reason cold press juices are $10 each for a 12 ounce bottle at Whole Foods. The process takes longer and you get more nutrients in each drink. If you have ever juiced, you know how long the process is – you prepare a LOT of fruits and veggies which result in a small amount of juice. It’s almost sickening. But it is worth it. With the Norwalk, we can spend a couple hours juicing and prepare several servings at a time in sealed mason jars, rather than juicing what you need for that day. It saves time in the long run. And you are getting as much of the raw nutrients as possible.

I started drinking more kombucha. This wasn’t intentional. Since being introduced to it last Fall, I really took a liking to it, but it can be expensive. I would support our vendor friends, Kombucha Kulture, whenever I saw that they were going to be at the local Midtown Farmer’s Market or other local events. But it can be $4-5 for a 12 ounce cup and that adds up! I love the taste and how refreshing the flavors can be. It’s also really good for you – it’s organic and has probiotics, detoxifiers, antioxidants and are highly nutritional. I’m drinking one right now! GT’s Enlightened Organic Raw Kombucha – Gingerade…yum!! (This brand goes on sale at Safeway fairly often for $2-2.29 a bottle.)

Because my life is super busy, I had to grab things from the store that were good for me and full of calories, but good calories. I turned to Odwalla superfood bars and juices. These are great mini-meals and full of really good ingredients. I try to eat and drink the items that don’t have sugar added, are mostly organic, and have higher calories. I also have been drinking some of their protein drinks after long runs. They taste great and are perfect for putting calories back in my body after running long miles. And it’s been great having a friend of Clint’s donating the superfood and protein juices while he’s going through treatment. So, we are saving a lot of money right now on those too!

I also went to my physical therapist a few more times this training, rather than only going to him when I had an injury. This was also intentional. I pretty much was using him for regular maintenance and injury prevention. When I saw him yesterday, he said I look lean and my quads look good and well rounded, rather than flat, like most runners. I was happy to hear this because that means all the squats and lunges must be helping! He said I should have a good kick at the end of my race. Well, I hope so!

I feel like I have put in a good effort, despite all the things going on in my life. I have always lead a busy life, but it got really, really busy these last couple months. Will all this pay off? I really don’t know. Does it mean I will have the best race ever in Berlin? I don’t know that either. But it was worth a try and I can at least say that I am trying to live a healthier lifestyle, feel good, and will continue to do these things moving forward! 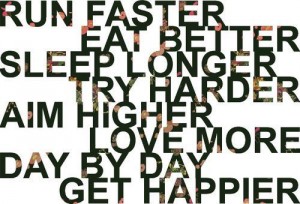 Are you doing anything different with your training lately? Have you seen any differences or improvements?

Monday September 9th marked the one month anniversary of when Clint had surgery to remove the cancerous mass in his testicle. I really can’t believe it’s been four weeks. I feel like it’s been so much longer. We’ve had so much going on in these four weeks and there’s still more ahead of us.

I am also less than a few weeks away from running the Berlin Marathon. I can’t believe this is coming up so fast! It’s been almost a year in the making and it’s right around the corner. But it’s also bittersweet. I am mentally (and physically) trying to get ready for being away from Clint during this time I am in Germany, but also mentally trying to be ready for this race. I honestly have no idea how I will do. I’m not saying my training runs lately have been bad or anything, just my focus is on lots of other things, so I am going to have to get back on the race mindset soon.

I ran my last 20 mile training run a couple days ago and felt pretty good. I can’t complain too much about an 8:20 average pace, so I’m happy that my training seems to still be going fairly well.

When I run, there are days I think about everything under the sun (I’m sure this happens to all runners) and other days when I think about how I want to run this upcoming race wearing my American Cancer Society singlet and can’t wait to run this for Clint. I know he’ll be on my mind while I run this next 26.2. This singlet has even more meaning than it did before. I never thought when I ran the Chicago Marathon in 2012 as a charity runner for ACS (helping the lovely Miss Jenny Cox raise money for this great organization) would I be faced with cancer in my own immediate family so soon. I have had family members with leukemia and breast cancer, but when it’s your significant other it’s even harder to process. He is my best friend, my partner, my love and I would do anything for him. But I know everything will be ok and after we throw some punches to knock this cancer down, we will come back stronger than ever. So I will be going against my normal attire for this race, which is wearing my last race’s participant shirt, and will be proudly wearing this blue tank. 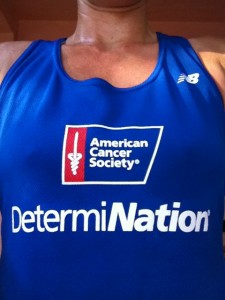 I also think I am ready to watch Spirit of the Marathon soon to get some great motivation. I’m thinking the night before I leave I will want to get lost in the film and think about my race.

As you can see I’m already planning details. Yes, I’m a planner. I’m already starting to pack and have been making my lists of things I need to bring to Germany (well, I’ve been doing this for months) and lists of who needs to be here to help Clint while I’m gone.