June 24th through 29th, I volunteered at the USATF Championships in Sacramento. I had various tasks including Media & Athlete Check-in/Credentials, Basket Crew, Shot Put & Javelin Retrieval, and Anti-Doping Escort. It was a lot of fun! Here are some of the pictures I took during the event. 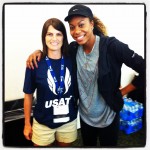 Me with Olympian Sonja Richards-Ross. 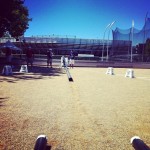 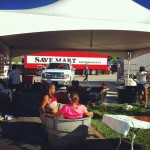 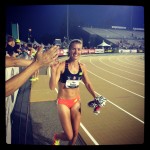 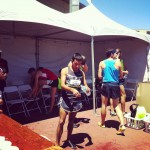 Leo Manzano getting ready for the 1,500m. 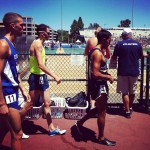 Walking onto the track. 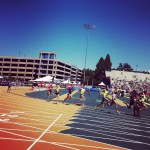 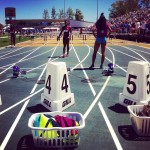 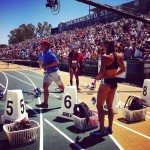 Lolo Jones (this pic was featured on Lolo’s personal Facebook page as well as on @runnerspace on Instagram!) 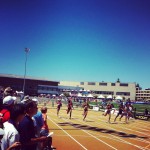 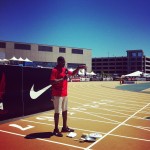 It was pretty darn hot here in Sacramento! 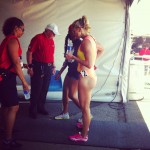 Maggie Vessey in another one of her interesting outfits after the 800m Final. 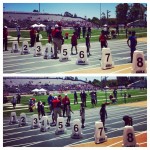 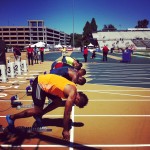 Today I got some exciting news! “Congratulations! You have been selected to be a Vitalyte Brand Ambassador.” Say what? Is this for real??

A little over five weeks ago, I submitted my application to be a Brand Ambassador for Vitalyte. I had tried their Chia Surge Energy Gels (see post: “Drinks that make me go mmm!”), liked them, and thought it would be really cool to represent the company and spread the word about their great, healthy and delicious products. I didn’t hear anything back and then forgot about it until I opened my email today!

So, I am really excited! I will get different products and other cool stuff shipped to me each month. I get to blog about Vitalyte, Instagram and Facebook about Vitalyte, and share my experiences and spread the word about Vitalyte. Sounds pretty easy and fun, right!?!

It’s going to be like being sponsored by a product, kind of. I mean, I don’t get paid to do this like an elite runner, which is totally fine. That’s not why I submitted my application. But as a moderately okay runner, I’ll take it as a compliment and I can’t wait to be a part of their Brand Ambassador team and have this support by a great sports nutrition company! I officially start July 1!

With less than 5 weeks until the Eugene Marathon, I’m starting to get a little excited. If you had asked me a couple or few weeks ago how I was feeling about this race, I would have had a different answer. But now that I am getting close to the taper and have one 20-mile training run under my belt, I’m feeling a little better.

Tomorrow is my last training session of the 8-week training with SRA. I have actually liked going each week and getting in extra speed work, interval training, Fartleks and hill training. I train mostly by myself, so it’s been a nice change to meet up with the group and get some extra motivation.

The hot weather has been a challenge at times, but I have been able to work around it most of the time. Getting up at 5am for a long run is definitely not my favorite thing to do, but I have to do it when it’s going to be a 90+ or 100+ degree day. If you asked my pal, Rick (an ultramarathoner), how he likes his training runs, he’d say the opposite. That crazy guy LOVES to run in the heat.

This week is the 2014 USATF Outdoor Championships here in Sacramento and I am volunteering for 5 days of it. I’m super excited and this has also led to a spike in my motivation and inspiration! I will give a recap of my experience after it ends on this Sunday.

You can read more here – http://www.usatf.org/Events—Calendar/2014/USATF-Outdoor-Championships.aspx

And here’s my lovely badge – 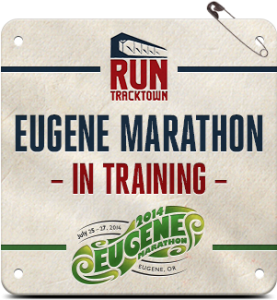 Hope you all have a great week!

I was supposed to run 18 miles today and had prepared last night by getting all my running gear ready as well as leaving out my Gatorade, water bottles and KIND bar on the kitchen counter. I set my alarm for 5am so I could get on the road by 5:30. Our hot temps in good ‘ol Sactown are in the triple digits these days and it’s making it hard to get longer runs in. But I was motivated last night and was ready to bust this out in the early morning.

Now, I’ll back up a bit here. The past 12-14 days have been not so fun in the sleep department. One dog was spayed and had four teeth pulled. Then both dogs have been dealing with fleas (come to find out the flea problem is bad with many dog owners right now). We’ve been giving lots of baths, doing lots of laundry to clean sheets and dog beds, vacuuming, etc. It’s been frustrating. So I’ve been up every night with one or both of them at least once a night, sometimes three times in a night. Sound exhausting? Yup, I guess it’s like having kids.

I can deal and function on less sleep than the average person but after several days in a row of interrupted sleep, it’s taking it’s toll. So, this morning I woke up at 4am to one dog needing to go outside. I looked at my phone and realized it was an hour from my alarm sounding. I decided to change it to 6am. I woke up before 6 because I had been tossing and turning and decided I was too tired to do this run. I really needed to sleep. I shut off my alarm and fell back asleep.

This only resulted in anxiety for me later in the morning when I realized I missed a long run! An important run in my training with only 7 weeks to go until the marathon. But I vowed to do it later this week when it cools down. Thank God it will be in the high 80′s later this week.

Even after getting mad at myself but somehow being okay with missing a crucial long run, I still came back to that anxiety. Ugh. Sometimes it’s hard for me to get past it and say “It’s okay!” And I was just feeling really unmotivated and didn’t want to leave the house. The heat outside was definitely not helping either.

So I then decided I was going to run on the treadmill at the gym. I had planned on 7 miles and it would be in a cool place, so no big deal. I finally was motivated enough to get my running clothes on and was ready to head out the door earlier this afternoon. Interruption: Clint needs me to take him to get his car. Dang. Now I have to go across town in traffic and in the heat. I had a feeling of what was going to happen.

And it happened. I got to the gym. Started running and 0.50 (that’s right – a half of one mile!) into my run is when I turned the machine off. That was it. Julie, one of the gym owners, asked me where I was going as I was leaving. I said home. And she said “You’re just not feeling it?” Nope. Not today.

I got home and just said that tomorrow will be better and everything will be fine. It’s not the end of the world. I’ll chalk it up to it being an “off” day and I will resume my normal training tomorrow. I have to remember the things I say. It’s okay and there’s always tomorrow.

Today is National Running Day! I can’t believe it’s already been a year since I won a CIM race entry. I mean, really…this year has flown!

Tonight, I joined the SRA (Sacramento Running Association) for their five mile run along the American River to celebrate this special day. It was a HOT evening of 95 degrees when we started. Yup, not my favorite time of day or temperature to run in, but I did it anyway. I needed to get out of my house and get some miles in and it felt good to get a run in, even though I got a little side cramp about halfway through from some lentil soup I ate for lunch. Ugh. But I pushed through it.

After, I grabbed a water, cooled down a bit and snagged a free tech shirt. They had all the leftover shirts from past events out and we were able to grab one. And that’s how I celebrated National Running Day! What did you do today? I hope you had a great run!

If you didn’t know, I entered a photo contest in May as part of Marathon Tours and Travels bi-monthly photo contest. I am trying to find other ways to get into some of the World Marathon Major races that are difficult to get into and this company provides guaranteed entries into races all over the world if you book your accommodations with them. The photo contest would gave me an opportunity to win travel vouchers to use towards any race, so I said “what the heck!”

After harassing all my friends and family to vote for my three pictures over a two week period, I won the “Scenics” category and this picture will also be entered into their end-of-the year contest as well! I won a $100 voucher and I am also eligible to enter the next contest in hopes of winning another $100. I’m super stoked that I am on my way to getting into another amazing marathon and adventure and hopefully it could be London, Tokyo or New York! 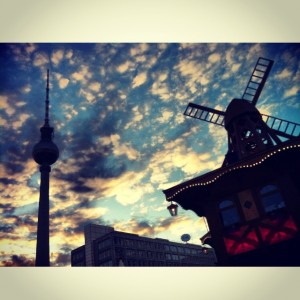 Yeah, yeah. I’m already a running geek, I guess. But I really felt like one when my package from PRO Compression arrived last week with the “grab bag” of three pair of compression socks that I was lucky enough to snag before they sold out in less than two hours. This was a super score! Normally these compression socks are up to $50 a pair, so to get three pair for $30 was just ridiculous. Since it was a “grab bag” I couldn’t choose colors or patterns. It was a mystery and I hoped I didn’t get pink ones (I’m not a girly girl). But I was happy with the ones I got. Even though I am just getting used to my PRO Compression calf sleeves, I can’t wait to try these lovelies out! 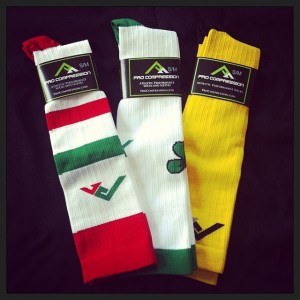 Last week we received our monthly The Costco Connection magazine in the mail and it caught my eye because it had ultradistance runner Scott Jurek on the cover. I was really surprised to see this and I almost immediately started reading the article. It’s only a few pages but it was a great little piece about his career, eating well and motivation. He’s been a vegan since 1999 and is quite an accomplished runner. I found this article to be inspirational and was an exciting part of my day. Check it out!

Runner’s World had posted a teaser video last week for a longer film that was going to launch today. The original “teaser” was only a couple minutes but it really touched my soul. That’s what it was supposed to do. So today I watched the 21 minute video, “Finding Strong”, and I want to share it with you. I think it will touch your soul as well.