I picked this race on a whim after I came across it searching for something else (I can’t even remember what it was that I was searching for). It was never on my “bucket list” but I love a new place to visit. And run a marathon. So I registered and found an inexpensive flight very quickly and everything was booked.

My last training run was the Tuesday before the race. I never got up to 16 miles like I had planned in the few weeks prior to leaving. I had a weird work schedule and I was busy the couple weeks before leaving. But I had just run my fastest marathon about a month and a half prior at the CIM, so I just said I’d not stress about it all and have fun. No goals – just run and enjoy. 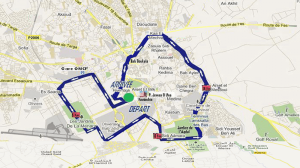 I went to the “expo” on Friday and picked up my bib and shirt. They told me where the start of the race was so on Saturday I walked over to find it so I wouldn’t be lost on race morning. The expo didn’t have much. I wouldn’t even call it an expo. Just the booths to pick up bibs and get information and a couple mint tea vendors to get free tea while you were hanging out. There was music and, maybe, a couple vendors. But that was it.

Vendor at the start of the race selling breakfast items

Since arriving in Marrakech, I had been drinking mint tea everyday, beers each night and almost no water. So I was totally ready for a race. Haha! I jest. I also didn’t eat pizza the night before. I had Moroccan food for breakfast and lunch, then beer, and hot chocolate and fries for a late night snack. Fantastic carb loading! I also didn’t go to bed til like 1am. Basically everything wrong before a race.

It was pretty chilly in the 30′s when the race started. I layered up more than I normally do because they told me there wasn’t a gear check and I wasn’t sure how long it would be before I’d find my friend Johnna at the end. So I wore a long sleeve over my short sleeve and arm warmers but took off the outer layer a few miles in and tied it around my waste. I also wore my gloves for a few miles as well. However, I did wear shorts even though it’s not customary for women to wear short clothing items in this country. But I am used to wearing shorts for races, so I just went with it. 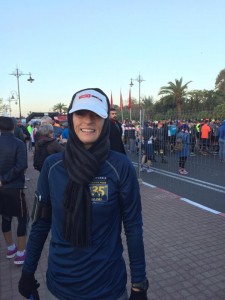 It was a little chilly on race morning

The start of the race came quickly and I ran fast and comfortable. Probably too fast but I felt great. I talked to an American that lives in Zurich and talked to a couple of British fellows who have run quite a few marathons. The one guy said he’s run like 320 and 200 of them have been in the States. A local man and I ran together for a large portion of the race. We never spoke to each other, but just ran the same pace for a long time. Toward the end maybe around mile 22, I passed him and gave him a smile and pat on the back as he drifted behind me.

The race is extremely flat, which is nice. It’s fast. There was a slight incline starting around the 20 or 21 mile but it wasn’t really a hill or anything. You also run through all sorts of areas of Marrakech. Even the ritzy area with nice hotels. We saw camels, palm trees, orange trees, olive trees, sheep, donkeys, industrial areas, residential areas, malls, and everything in between.

Aid stations were about every 3 miles and most just had water, but later in the miles they would have mandarins and dates. Oh so good! None had electrolytes so you would either have to carry your own or just use the fruits for sugar. It didn’t seem like I was sweating a lot, so I was ok without electrolytes. I just ate my shot bloks every 4 miles, and that worked well.

Police had intersections stopped and would let us run through, although some cars and scooters would sneak through. I almost got hit once because drivers in Marrakech are impatient. Doh!

I didn’t use a restroom at the beginning of the race, partially because I had already gone at 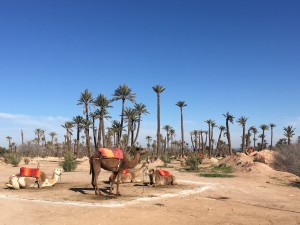 my hostel, but also because I didn’t see any at the start. So, of course, I had to go to the bathroom during the race (which is not normal for me) and only saw two porta potties at mile 13 but decided not to stop for some reason. Then I realized after that I really needed to go and the miles passed by with no restrooms. So around mile 18, I finally stopped at a really nice hotel and asked the security guard at the gate if there was a “toilette” (they speak French). He pointed to the guard station and let me go there. The fun part was it was a hole in the ground with a bucket and faucet to clean it when you were finished. I probably spent 4-5 mins in there. Most of the time was spent filling the bucket to clean the toilet. But at that point I desperately knew I should use a restroom and not care that it was a hole in the ground, or else I’d poop my pants while I was running and I know that wouldn’t go over very well. 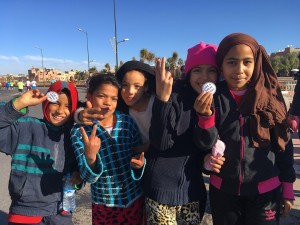 kids. I thought I may get weird looks since I was wearing shorts, but I didn’t. I decided to stop and give some kids ‘Live A Great Story’ stickers and they were so happy. I only had two on me and wished I had packed more in my fuel pouch. I also saw belly dancers and tourists who cheered us on. 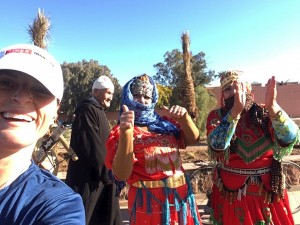 I didn’t see very many female runners. But many runners were from all over the world and I just love it. Listening to different languages being spoken while we are running is so cool to me. I talked to a Polish man, German man, British, Italian, American and, of course, Moroccan, and I know there were plenty from other countries.

I thought the race was pretty well organized. Lots of aid stations with plenty of water and 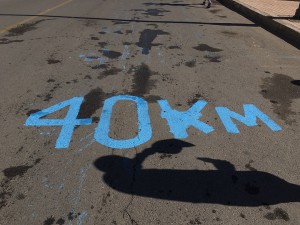 food items. Police were out along the course to help make sure traffic was stopped when we crossed main intersections. There were blue arrows painted on the pavement to follow the route. We got tshirts and medals. And it wasn’t that expensive either. Keep in mind there is a 5.5 hour cutoff though.

My final time was 3:51 on my watch (I haven’t even looked up my official time). I can’t complain at all. I had a lot of fun and had a smile on my face the entire time. I made several quick stops to say hi to kids and take pictures so I guess I could have had a faster time if I hadn’t made those stops, but it wasn’t about time for me. I easily could have qualified for Boston again if I didn’t stop to use the restroom. But my motivation was just to not sweat it and enjoy the experience. Races in other countries are to enjoy and see other parts of the world. To see the people, the culture, chat up other runners, live in the moment, and live my story.