**Sorry for the major delay in getting this out to my fellow runners. Lots going on the last few months and other things have taken precedence, but I am trying to get back to my passion and get focused again.** 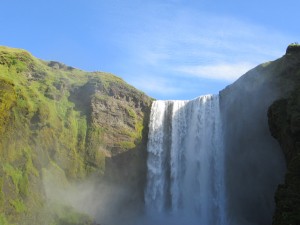 After a few days of exploring Iceland, it was time to get ready for the race. Had my pizza and got to bed at a decent time. I even tried some Haribo black licorice with salt that tasted terrible. I love black licorice, but this Dutch treat was so gross and disappointing. I thought it would be a great treat before bed and a good carb load, but no. Sad panda.

The weather was fairly warm. It had been cool the past few days, but when I woke up I knew right off the bat it was going to be a warm day when I was getting dressed and didn’t need my arm warmers and gloves that I came prepared with. I had been watching the weather for a couple months and it was consistently showing highs in the mid 50’s, but not today. But I came prepared with lots of fuel and I was glad I did.

When I arrived to the start area, there weren’t too many runners yet. I thought maybe it may be a smaller turnout, but that changed after about 30 minutes. The start of the race was in the middle of the downtown area, right in the busiest part of the city. The race start was at 8:40am which is not too late but still later than I’m used to. I had read they were going to have pacers but what was confusing about them was that they were only for the half marathon runners. I thought that was kind of bizarre. So I got in the 1:35-1:45 group after talking to another runner that explained that would be the group I should be in. And the pacers left mid way to follow the half marathon course. Bye bye pacer…

I started fast but it felt totally comfortable. It was the pace I had been training at, so I felt fine. I kept this up for several miles but about mile 10 or so I decided to slow it down and enjoy the race rather than having tunnel vision. I realized I was so focused on getting a fast finish time, that I wasn’t enjoying the sights and sounds. I hadn’t talked to anyone else running, or listened to runners chatting, or heard any of the entertainment along the course. I also realized the 60/40 ratio of flat vs hills was pretty right on. But the hills were long and gradual, which aren’t that bad, but not fun either. We got to go by a botanical garden and it started and finished in the downtown area where lots of spectators gathered. There were several long stretches where there were no spectators and that’s always hard with very little to help motivate or keep you going when you start to feel fatigued. But I did manage to take selfie near the natural reserve and harbor area. Hey…when in Iceland!

My original plan was to get a 3:38-3:40 finish time, definitely before 3:45, but the warm weather got to me a bit toward the end. I used up all my fuel and was sucking down Powerade and water at each stop. As I got closer to the finish, I came upon a runner with a Tufts Marathon Team jersey on and asked him if he was from the US and we chatted for a minute. His hamstrings were tight and he was taking it easy so he wouldn’t pull one. My hamstrings were feeling tight too but I wanted to get in before 3:50 at that point so I wished him luck and took off. Luckily, I was able to make it in at 3:49:53. 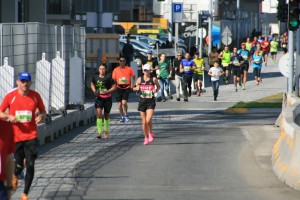 Toward the end of the race

After the race, I just sat for a few in the corralled area for the finishers and ate the doughy pretzel stick they gave us (which was really good!) and grabbed some water. My legs felt funny from the pounding on the asphalt so I needed to massage and rest my legs and didn’t feel like walking anywhere just yet. I met up in the designated meeting spot a bit later and laid down on the grass for a while and stretched. I sat and people watched and noticed friends and family had brought beers and champagne for their friends who finished the race. I heard a pop behind me and knew the sound well…champagne! After a bit, I changed and got into more comfortable shoes. Then it was time for lunch! A burger, fries and beers did the trick. We found this cool bar called the Laundromat among all the crowds in town for Culture Night, which is a tradition after the marathon. Lots going on – live music, art, shopping, bars are hopping and more. We even stopped at the Harpa for quite a while and enjoyed all the free exhibits they had going on all day (as well as yummy cupcakes that were free!).

Overall, I felt like the race was very organized. People were friendly and helpful. The expo was easy to get to and had plenty to see, the course was an interesting route around town and along the harbor, the aid stations had plenty of Powerade and water (although there probably could have been a few more), and it wasn’t too big of a race. Everyone got a medal at the finish, and we also got participant shirts and a free pass to the local swimming pool, which I used the next day. That was a great perk for sure…a nice way to relax the muscles and people watch at the local hot pools! I would definitely recommend this race!