Oh Hi! Welcome back to my blog! It’s been so long. Covid really did a number. And now after all this time, I have something to write about…

After 16 long Covid months and 3 postponements, the Avenue of the Giants marathon was finally here! I honestly wasn’t sure how I was going to perform because it had been so long since I ran a full (almost 2 years!), but also my training was just okay. It wasn’t anything amazing. I was happy to run with some other running friends during this training period, which is definitely helpful in getting through the long runs, but I knew my body wasn’t what it was like last year pre-Covid and while training for this race during the Spring of 2020. I also had to juggle training around my crazy work schedule and swap days and my 20 mile run that should have been at the 3 week from the race mark ended up being 4 weeks out.

I ended up traveling solo up north to Humboldt County and went the afternoon/evening before. Found an Airbnb just about 20 minutes or so from the start of the race. I settled in for the night after driving in a good amount of rain on the way up. I ate some pizza that I cooked before I left home, I had a smoothie from the town store in Phillipsville, and hydrated well during the week and that day. I laid out all my running gear and was ready to go as best as possible. I ended up falling asleep kind of early, but I think that’s just because I drove four hours and was just done for the day. Oh, and my period randomly started. How lovely. Wasn’t expecting this and this can also not be so helpful during races.

I got up bright and early Sunday morning and drove through the rain on the 101. It was a little scary being so dark and slick. When I arrived, everything was going pretty smoothly until I asked a couple next to me in the parking lot if they knew if there was a gear check. She mentioned she hadn’t run this race in years and had forgotten. Then she mentioned something about the email we got with our bib number and I stopped in my tracks. What? What email? I didn’t get one.

So as luck would have it, as I arrived to the table to get my bib, they didn’t have me on the list. Oh man! Had to talk to the RD and sure enough, for some reason they had pushed me to the 2022 list rather than this race. Easy mistake with all the postponements and everything else going on. She was very accommodating and helped me get on the roster for that morning. Got my bib, goodies and finished getting prepped for the race. Ate my Kind bar, banana, drank some Nuun, and utilized the porta potties with no lines.

Race start was 7:45. Less than 200 people at the start. It was misty, wet and humid so I knew this was going to be interesting for myself knowing I don’t do so well in humidity. Most people wore their masks at the start line, which I appreciated, and as the gun went off and we spread out masks came off. All good.

It took my legs a few miles or so to feel warmed up. They actually kind of felt a bit heavy, but after mile 4 I started to feel good. I had my music and just tried to settle in. I had no time goal in mind, so I just settled with the fact that there was no PR or BQ for me in this race and was completely okay with that. It wasn’t even a thought really.

The course was amazingly beautiful with all the lush greenery and tall trees. Well spaced out water and Gatorade tables and some porta potties spread out as well. Volunteers were kind and helpful. 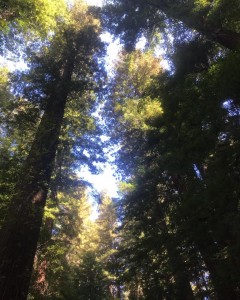 As I got to about mile 9 my music stopped. I realized the condensation from the humidity was getting into my phone through my armband. Oh well, no music. I kind of trudged along but I  was just feeling ok. At one point, I felt that my back was completely soaked. You could see other people with completely wet shirts and shorts.

No amazing bursts of energy and no real amazing running feelings. Then around mile 18, after I had already taken a few walk breaks for a few seconds, my right knee started to feel funky on the side. Nothing major but something was off. I kept running but as the miles went on, the feeling was getting worse. I started doing intervals of walking a few seconds or so, then running. But the distance between these was getting smaller and smaller. I ended up having to use the restroom around mile 20 and it was after that, that my knee was getting tighter and tighter. I could walk but once I started running again, my knee just felt like s$&t. The last couple miles were brutal. I could barely run but would still get the intervals in. I literally was saying out loud “you can do it you can do it you can do it” over and over. “Just get to the finish line.” My watch also lost gps signal the last few miles. So everything was going wrong. No music, no phone, no watch, and my body was falling apart. The absolute worst. And no spectators. That was difficult too. 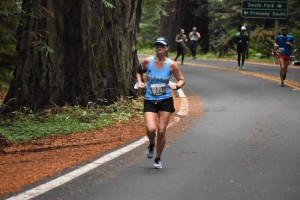 Earlier in the race when I was feeling way better

It’s funny how when you run a marathon you still think “ok, amy, you can get in by 4 hours. It will be fine.” Then it moves to “ok, amy, you can get in by 4:15…no big deal.” Then you see that you are about to hit the 4.5 hr mark and you still say “amy, dude! It doesn’t even matter. You ARE going to cross the finish line (even though you considered finishing only half but then said NO! to yourself) however the hell you get there! Even if you crawl on your hands and knees!” 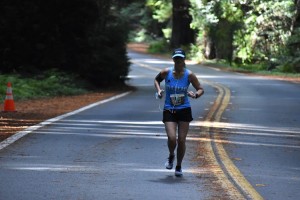 The last couple miles when I was barely holding on

So my official time was 4:31:22. One of my worst times. But I finished. I gave myself a few seconds to tear up over the agony and what felt like an incredibly unsatisfactory performance. I don’t know why my knee did that since I haven’t had any knee issues in like 10 years. It’s a major IT band flare up. Like super inflamed IT band. 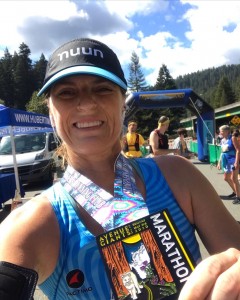 A guy asked me how it was while I was collecting my food goodies at the end. I was disappointed in myself and I replied “It was shitty.” I don’t think he knew what to say to that, poor guy.

I hobbled to my car to change, eat and hydrate. Ate an entire orange so fast, with juice running down my face and arms, but it tasted so amazing. And then got in my car to drive 4+ hours home. That did not help my knee at all but thankfully I had some ice packs in my cooler so I would put them on my knee while I was driving. On the drive, I ate pizza and grapes that I brought and some Doritos they gave at the end of the race. I also drank coconut water and a pressed lemon juice/dragonfruit beverage to hydrate. I knew I needed to get calories in me fairly quickly so I didn’t feel like crap on the drive home.

I checked the official results the next day, to make sure my bib made it in, and weirdly I placed 3rd in my age group. It’s not really saying much cuz that was out of 9 but, hey, whatever. 25/62 gender placement and 86/160 total runners. Not too bad considering I was a wreck. (Insert gigantic laugh) But imagine if I had been in my normal tip top shape…I saw the results for the top 10 women and I possibly would have placed in there. I wondered if this race had happened in May 2020 if I would have had a way better outcome. Honestly, I know I would have. No doubt.

So now I’m nursing my right knee. I need to do some work to get it back in shape. It’s only Tuesday (wrote this yesterday, but published today) and the inflammation has gone down quite a bit but it’s definitely still irritated and I need to take care of it. Lots of icing and stretching and I’ll continue with the stretching for weeks. I have a race in Dec so I just want to make sure I will be healed for that.

I’m glad I finally did this race but there are a few things I would have done differently. Maybe stayed a couple nights up there. Wished I had a friend or two with me. We can’t control the elements but I wished my body had felt better and my training was more solid. I probably shouldn’t have helped my friend weed her yard, because my body was a little sore from that and I had a knot in my right buttock and I think this is what may have caused the knee issue. But it’s ok. It can’t always be perfect. As a few of us runners say “Marathons are hard”. I am still happy it’s number 36 marathon to check off!