Ok, so I lied when I said the CIM was my last race of 2013! I had kept it a secret that I was registered for a half marathon in Scottsdale, AZ. I had registered for this race in November, but pending my outcome of CIM. As long as my body felt good, then I would run it. If for some reason I felt like crap or got injured, I wouldn’t.

Just four days after CIM, we flew to Phoenix. My body was feeling a lot better but my quads were a little tight still. I had been icing, stretching, cycling, more icing, stretching…and I cycled when I got to my dad’s resort. By Friday, I said “Let’s do this!”

I signed up for this race because my dad and stepmom have never seen me cross a finish line of a road race in all the years I have been running half marathons and marathons. I thought it would be a cool experience for them to see this and I selfishly also wanted to run a race in another state while I was visiting. A half marathon was do-able – I did not want to run another marathon this soon after the CIM. So this was perfect timing while I was there.

I ran the Runner’s Den Fiesta Bowl Half Marathon in Scottsdale. The race location was about 45 mins away from where we were staying, but not too bad of a drive at 6:15am. I got to the start with very little time to spare. I wasn’t worried too much since it was a small race. I got in a porta pottie line immediately but as we inched forward I realized I didn’t have enough time. So I darted out of line and ran to the start. 30 seconds later the race started!

It was a very flat course in the town of Scottsdale. It was also fairly warm compared to the marathon last weekend. The temp was in the mid to high 40′s and I didn’t even need gloves. Nice and sunny! The race also had only about 3,000 runners combined with both the 5k and half marathon.

The race had a good amount of water and electrolyte stations and even porta potties along the route. I actually had to stop about Mile 3. I did not want to hold it for another 10 miles! But I was fairly quick about it.

The last few miles of the course were along a bike trail. I saw what I thought was a large dog with a toy in his mouth. I looked for an owner thinking they were playing fetch. But there was no “owner” in sight because it turned out to be a coyote with a duck in his mouth from the pond he was walking away from! Then I saw a second coyote walking the opposite direction. This little grassy area and pond were right next to homes! I was surprised these coyotes were so close to the houses. It was pretty interesting to watch as I ran by.

As I finished the race I saw Clint and my dad and Jackie (stepmom) along the railings. It’s pretty rare that I can spot my supporters at the end of a race this easily. It was fun to see them at the end and hear my name called as I crossed the finish line.

I got my medal which looks like a sun catcher, picked up some things to eat at the booths, we snapped a few photos and then headed back home. 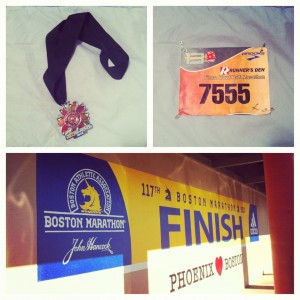 When I picked up my bib on last Friday, the man that helped me asked if it was my first half marathon and I said no. I mentioned that I was from Sacramento and just ran the CIM last weekend and he said he ran the first three CIM races many years ago and we chatted for a few about how there’s only 12 runners left that have run all 31 years. It’s always great to have conversations like this with fellow runners. However, the best part of packet pickup was seeing the Boston Marathon finish line painted on the outside of their shop. I knew it was meant to be.