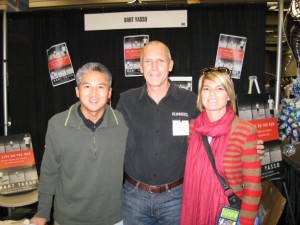 To most people, the name Bart Yasso may sound like a cartoon character. Or to my boyfriend, it’s Bart Lasso. But to the running community, this guy is well-known, and even called the “Mayor of Running.”

Bart Yasso is a prominent figure in the sport of running and is also a columnist for Runner’s World, created the Yasso 800′s marathon training plan, and has also run races on every continent. Pretty impressive!

Brian and I were lucky enough to meet him in 2009 at the CIM Expo. Brian was way more excited to meet him than I was. I really didn’t know who he was then. But as I continued with my running adventures, I started to hear more and learn more about him.

So a couple of weeks ago, we found out Bart was coming to our local Fleet Feet store to do a short run and a small presentation. We jumped on it and RSVP’d! 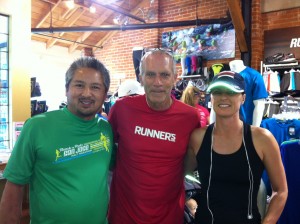 Today we were lucky enough to meet him again. I asked if he would take a photo with Brian and I, just like he did in 2009. He was laid back and happily obliged. He also was very approachable and talked one-on-one with anyone that came up to him. After a short mingle period, he took a group photo with all of us (about 30 runners?) and then we took off on a 3 mile run. Brian and I left with the others in the front of the group while Bart was bringing up the rear of our run through Midtown, around McKinley Park, and back to the store.

It was a fairly warm 84 degrees out this evening, but it was totally worth it. We got to experience this once in a lifetime opportunity. It’s not too often that you get to run with one of the best. It was actually kind of cool. It made my Wednesday.

One thought on “Bart who?”