Going into my 10th CIM, I was mostly excited that it was my 10 year anniversary of running marathons and my 10th consecutive CIM and I’d get my loyalty pin. And it was my 27th marathon! I was happy and in a good place.

A week or so before, I found out my friend Jen deferred so I would be running by myself, so I just opted to join a pace group. I just wasn’t sure which one. This was really the only dilemma.

My training had been just fine. Nothing special really. I had started 3-4 weeks late because I climbed Kilimanjaro in August. But that delay didn’t really bother me. I just started my training runs later in the schedule and caught up. I had been doing hill repeats each Friday with Jen over the summer but then after she went back to school we couldn’t get those back into the routine. That didn’t bother me either. I tried to get in some intervals and stair workouts every now and then. To be honest, my 20 mile run was convoluted and not the best because I didn’t do my normal straight out and back run on the trail. So I had no idea how my race would turn out.

I had a pre-race massage on Friday and I volunteered at the CIM expo at the info booth and had fun chatting with runners. I had to work an event the day before for KIND and ran into some runners near the expo as well and that’s always a good time. The evening before the race I just hung out at home watching two of my favorite musicals back to back, made my playlist, laid everything out, had my pizza and stayed warm with my dogs. I had planned on sleeping in my bed but fell asleep on the couch, which probably wasn’t the best idea.

I also read a blog on Oiselle’s website by runner Devon Yanko. The title said not to open til race day but I knew I wouldn’t have time so I read it the night before. It really struck me and I held on to it during race day. Here’s the full post: http://www.oiselle.com/blog/do-not-open-until-race-day-cim-marathon

I had some conversations with runner friends before the race about pre-race nerves and training and it made me feel good to be able to give some advice after all these years of running. I know for myself, other runner friends have given me advice and there are a few things I always keep in mind and I’m thankful for what advice they’ve given me.

As the gun went off I was really happy and so excited about the day. I actually got choked up a few times in the early miles. I think sometimes I just realize how amazing this is…all these awesome runners and athletes who have worked their butts off and have every bit of their heart into this. It’s never easy and you have no idea how it’s all going to play out. It was chilly but the day was so beautiful…in so many ways.

I stayed with the 3:42 pace group. I was actually running a bit faster but would back off and try to be a little conservative to not exhaust myself. I don’t really remember when I pulled away from that group but it was still early in the race. I realized for miles that I never saw the 3:37 or 3:42 pacers. I was somewhere in between for the majority of the race.

Around mile 9 or so I felt my right sock seam rubbing and creating what could turn into a big blister. I would use my toes while I was running to adjust the sock a bit but it wasn’t really doing the job. So around mile 10.75 I pulled over and took my shoe off and adjusted it. So much better! I knew I was risking a few things by doing this: 1) being able to get my legs moving again and into the right pace once I stopped, 2) adding on time by stopping. But I also risked getting a fat blister and not being able to run if it got really bad.

After that stop everything was smooth. I listened to my music, danced in my head, I wanted to dance on the streets, I saw friends that helped me continue, and I just kept going. I can’t really explain what happened, but even though I knew things could change at any time, I just was in such a great zone that I didn’t really stray from running hard and consistent. I know I had a smile on my face. I also remembered the blog I had read the night before and told myself “Be Brave.” The word “brave” had come up a few times recently in my life and it must have been a good sign for me.

As it got to the last several miles, I realized that I was going to BQ no problem. I knew that I didn’t even have to worry about a small cushion. My quads were working hard and were getting sore, but nothing excruciating. I drank from every water station except one, which was near the end because I didn’t want to lose momentum. I ate all my shot bloks at their scheduled times. I even took an orange slice from a spectator. Everything was going very smoothly.

As I approached the East Sac miles I knew Jen and some other friends would be out there and it’s just so exciting and filled with so much energy during this area. It always lifts my spirits! I just kept going knowing there was going to be an awesome ending to a great morning. As I approached the finish, I saw my friend Brian. He is my first running partner and the person who got me into running marathons. I wouldn’t be here without him. It made me smile to see him out there.

Right as I was turning the first corner to get to the finish, a spectator ran in front of me and another runner. I told her to get out the way. It was probably rude of me, but I thought it was incredibly stupid of her to run across the course while runners were finishing. As I rounded the last corner to the finish line, I saw the clock and couldn’t believe it. I can cry right now thinking about it. I did start crying as I crossed. I was so shocked and so beyond happy. I never thought I would PR. I knew a BQ was possible, but to beat my fastest time was never in my thought process before this. I was on cloud nine!

The only thing left to say is that the journey of running marathons is one that not many people get to experience. I think us runners know what we all go through…the tough trainings, the ups and downs of what happens during races, the amazing feelings of accomplishing your goals or beating your goals, the times when you feel defeated, the comparing yourself to other runners, the way we are so hard on ourselves. We are all very strong individuals and determined. No matter what, we get back up and move forward.

This race and day will mean so much to me for a long time. I am really looking forward to going back to Boston. I don’t know if I could ever duplicate this race again, but it was as close to perfect, for me, as I could have gotten. Now, a race is never perfect, but I’ll take it. It showed me that my body and mind are capable of so much. Even during difficult times, you can move forward and you can accomplish so much. This race was me taking a chance and being brave. I leave you with this – Fucking follow your bliss! 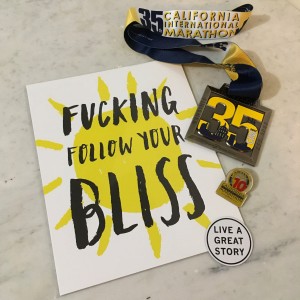