After months of preparations and training, the time had finally come. I was in Berlin and awaiting race day. When I arrived, I was thoroughly exhausted from layovers and a long flight. I was hoping I could catch up on sleep and it wouldn’t affect my race. I also needed to hydrate…really bad! 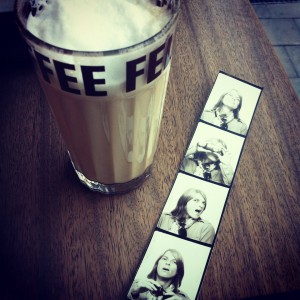 No, this is not proper hydration

I didn’t get any short runs in after traveling to Berlin. I just wanted to rest up. But I had a chance to explore the city and the day before the run, saw Brandenburg Gate, the landmark we’d be running through on the way to the finish. I was having a tough time mentally getting through Saturday, having not heard from Clint in 24 hours and wondering if he was okay or not. I had a feeling he was probably sleeping off chemo but I just needed to talk to him to make sure he was alive and okay. So, this was not helping my motivation to run a race. I was having a hard time not having my biggest supporter with me in this great city.

But as I prepared my clothes and running items for the morning, I started to get a little anxious and that was better than having feelings of not wanting to race. I did end up hearing from Clint (finally!) so I felt a TON better and this helped in my mental preparation for the race. 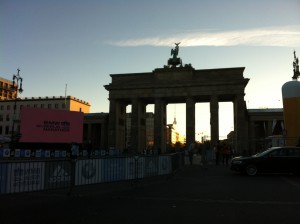 Bright and early before the race

This race didn’t start til 8:45am, so it’s a lot later than most races back home. This also meant I didn’t have to get up so damn early, which was nice. As we got to the start area, there were so many people. 41,000! But the first thing I did was get in a porta pottie line. This one wasn’t too bad and was very short. But as we made our way into the gear check area, I needed to use the restroom again and the lines were outrageous!! I wish I could cart around my own porta pottie because these European races have no idea how to prepare for a race and how many porta potties they should have. I stood in line for a loooonnnggg time and then realized the gear check was going to close, so I had to leave the line to get my bag to the proper numbered section. And by this point, I was running to make it in time and make it to my corral. It just became chaos. Volunteers didn’t know where things were, so that was confusing.

I finally got to the corral but had to climb over the barrier to get in. I lost signal on my gps watch, so I had to mess with my watch one last time. Then finally, we were off! We were packed like sardines. This does not make me happy. Having to dodge people or go at a much slower pace because people in front of you should not be in the corral, is really frustrating. And the crowd of runners never dissipated. But my pace was good and I was feeling very comfortable and relaxed. The course was really flat and that was a bonus. I pretty much tried to zone out by listening to my music, but I did have the volume down low enough that I could hear the amazing crowds of spectators. Spectators in European races are much more excited, seem to have a greater love for this sport, and I just feel have more spirit. Don’t get me wrong – Americans are great too. It’s just different. And something like 120 countries were represented at this race, so people from all over the world were at the race with their country flags and are very proud to be cheering on their runners. It’s very cool!

I ran this race without my hydration belt. I didn’t want to pack it in my luggage and wanted to rely on just using the water booths along the course. However, these water booths were chaotic as well! I really had to watch my footing as people were darting all over the place in front of me to get water cups. And it was just super wet on the ground and runners would just toss their cups below them, rather than out to the side of the course, making it a huge hazard to runners. I definitely lost seconds here having to slow down and get around all the runners. 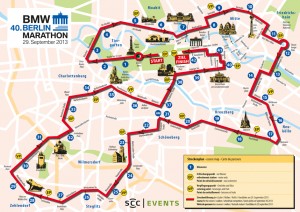 I have to say that I was so focused on my time goal that I wasn’t paying attention to my surroundings too much, meaning soaking in all of the city as I ran by. I observed other runners and spectators, but not the sights. I did feel like this group of runners was more in tune with running apparel and compression socks and shoes, unlike at the Paris Marathon last year. I felt like those runners just put on their raggedy workout gear to run the race. I remember around mile 15.25 we ran under a bridge and there was a large group of people pounding on metal garbage cans and it was pretty awesome to hear. The sound echoed under the bridge. Loud and festive and everyone was cheering.

As I continued to run, I checked my watch frequently. I realized I could make it under 3:40 with a few minutes to spare. I was just holding on and working hard to maintain my pace. I would speed up a little and slow down to relax a little if needed, but my pace was good. I actually prayed to God. I know that sounds corny, but I did. I actually prayed like three times to help me make it to the finish line and help me make this goal.

As I ran the last few miles, I was tired, but I was still hanging on. I was looking for the Brandenburg Gate knowing this was near the end. It seemed like it was taking forever for it to come in view. And then I started to get confused. My watch passed 26.2 miles and kept going. What is going on? How much further do we have? Aren’t we done yet? I saw the 42 kilometer sign and the finish had to be near, but it even seemed longer than it should be after that sign. I could barely see the time clock, but that wasn’t helping either. The time on the clock was started when the first corrals crossed the start line, so it was about 15 minutes ahead. Now I was totally thrown off as to what time I was going to cross the finish line. I kept pushing trying to speed up, but my legs were tired. My watch now was getting close to the 3:40 so I didn’t have that cushion anymore. What the heck?? When I finished, my watch said 26.85 miles. How could it be this far off?

So, my final time was 3:41:34…35 seconds shy of a BQ. Super disappointed. I thought I was golden. I thought I was going to be kissing the ground and jumping up for joy. This definitely did not happen. I was pretty bummed. I worked really hard for this.

With my medal in front of the Reichstag building

As I kept walking to get my medal, then my wrap, I was starting to feel faint and I couldn’t see very well. I knew I needed fluids right away. I got a water, then electrolyte, then I got a hot sweet tea. This tea was soooo good! I really needed to sit. There were too many people around me and I just needed to get away from the masses of runners. I started to feel better and made my way to the gear check. It was getting a little chilly so I needed to change quickly. I then got my finisher beer (which was non-alcoholic) and went to the family reunion area.

Running a race with 40,000+ people is tough. I am starting to realize that while I LOVE running races all over the world, I am not a fan of running with all these people on the course. That sounds horrible. I love people and I love observing all the cultures and differences, but it makes for chaos and the runners never spread out, so you are constantly fighting the crowds to get past people. And some runners don’t have good “race etiquette”.

But the weather was perfect for running and it even allowed for a world record set by the first place finisher. Pretty amazing to be apart of another race with records being set.

Even though I was bummed about my time, I tried to remember the positives. I completed my third World Marathon Major, I did end up with a great time, I love being able to travel to cool cities around the world, and I have a lovely medal to take home and add to my collection. To make myself a little happier, I bought a gerbera daisy at a flower shop at the subway line near the apartment. Just one euro and I was happy. 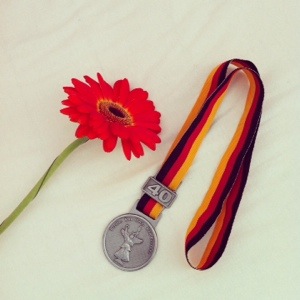 I don’t know what my next adventure is yet. I have lots of ideas, dreams, and am hopeful. I’m still waiting to hear if I got into London. Until then, I’m not making any new marathon plans for 2014, but I’m getting anxious to get something locked in.

2 thoughts on “Halfway around the world”